Park Pharmacy Trust, a registered Educational Charity, has since its inception in 1984 been working closely with Plymouth City Council for the wider benefits of the local community. It has received National recognition for both its innovative approaches to life-long learning and as a tourist attraction for visitors to Plymouth. Its famous C J Park Pharmacy, the last remaining Victorian chemist's shop in Plymouth, established in 1864, had been a major tourist attraction in the Merchant's House Museum where it was manned by trust volunteers. There thousands of visitors could see the pharmacy, try their hand at old fashioned pill-rolling (and earn a certificate of proficiency in the art of pill rolling) and talk to the volunteer stewards on duty. A weekend event held at the Merchant's House Museum Pharmacy is Phun, attracted record numbers of visitors.

The pharmacy was televised Nationally to over 8 million viewers when Park Pharmacy Trust became the joint United Kingdom winner in the Tourism and Heritage categories of the BBC's ''It's My City!'' competition. In fact, Plymouth, because of Park Pharmacy Trust, became the only winning city in the south of England. 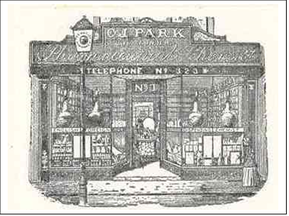 This is the way the pharmacy purchased by Mr Charles Park in 1875, looked in 1864. It was then at no. 1 Mutley plain. It is thought that Mr Park moved the pharmacy to number 23 Mutley Plain around 1879. The original shop had four carboys (big glass bottles) in the window whereas at 23 Mutley Plain there was only room for three carboys. The fourth carboy was found in the hayloft and is in the collection of Park Pharmacy Trust and will be included in the C J Park display in the Plymouth Health Science Exploratory. .
​ 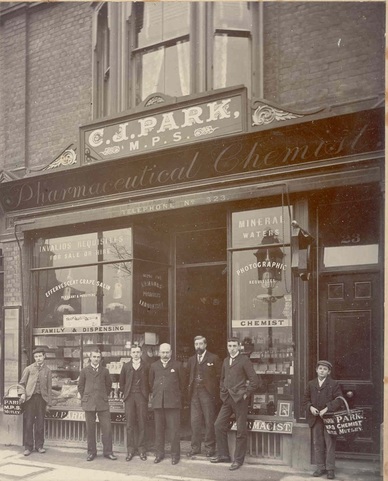 Mr Charles Park (third from right) with his staff around 1910 and the delivery boy on the left, who worked for the Park family for 40 years was known as ‘Park’s Express’. 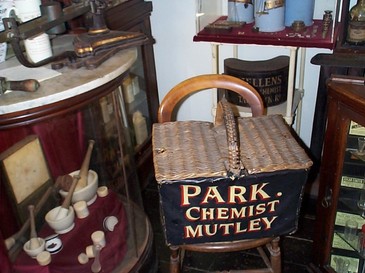 The original basket covered in oil cloth and conserved was in the Merchant’s House Museum from 1984 until 2012 when the entire shop and display was sold at auction for £26,500 with the proceeds going to Plymouth City Council. 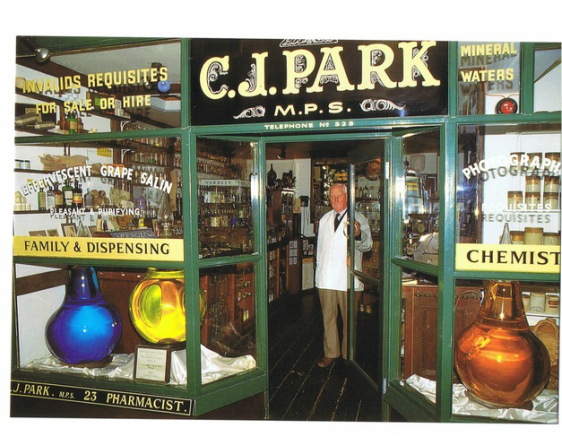 Mr Charles Armstrong Park, the son of the founder, Mr Charles Park, used to greet his old customers on a Friday afternoon after his shop had been rebuilt in the Merchant’s House Museum

Park PharmacyTrust has been recognised on many occasions for its innovative and imaginative work in education and life-long learning.

​In 1984 Park Pharmacy Trust pioneered recall reminiscence sessions in collaboration with Age Concern Devon and Plymouth Age Concern. It also runs hands-on practical workshops for primary school children (of which there are currently five). These Children's Industry Workshops have attracted National and International recognition when the chairman and curator of the trust were invited to give a presentation at the Edinburgh Science Festival, a conference in Amsterdam at the first European Week of Scientific Culture, and was short-listed for the prestigious Jerwood Award. It has received two grants from COPUS (Committee on the public Understanding of Science) and other grant awarding bodies including two recent grants for mental health from Plymouth council. It received a commendation for its innovative educational work from the Gulbenkian Trust's Museums and Galleries Awards. And in 2021 ran a successful Awards for All National Lottery Project A novel approach to tackling Covid-19 loneliness.

The trust has its headquarters in Thorn Park Lodge, Thorn Park, Plymouth. At the lodge is a pharmaceutical library, a collection of materia medica (used in the past for making pharmaceutical preparations) an extensive collection of artefacts and old-fashioned proprietary goods. People of all ages visit its headquarters (by appointment) where they are transported back in time by the touch and smells of our pharmaceutical past and can even a certificate in pill rolling and powder envelope folding. For many years the trust has been developing a medicinal garden at Thorn Park Lodge where visitors can learn about plants used in the medicine or just sit and enjoy the surroundings. The garden is open to the public free of charge.

In spite of enormous opposition and claims made by all the people opposed to the development that Thorn Park Lodge and garden were within Mutley Park, and not brown field land claimed by Plymouth City Council, planning permission was granted Emeris Coolart Ltd, in a profit sharing development, to build 5 houses in the medicinal garden at Thorn Park Lodge and the adjacent garage site owned by Emeris Ltd and Coolart Ltd.

Unfortunately, Park Pharmacy Trust lost the judicial review but saved the garden and prevented the development.

There was one good and one bad outcome of the judicial review hearing:
The good outcome was that the judge in the High Court acknowledged that there had been an error on the part of the planners in believing Thorn Park Lodge and garden were on brownfield land. Instead, as established in the High Court, the lodge and garden were firmly within Mutley Park itself within the Mannamead Conservation Area. The proposed development for which planning permission had been granted could not now proceed without first a separate application to the Secretary of State for change of use from green space to residential. This application is unlikely to be successful while Park Pharmacy Trust, who has security of tenure at Thorn Park Lodge ad garden remains a tenant. And the planning application has expired.

The bad outcome was that the judge considered the errors made by the officers (the planners and their legal advisors) to be ‘human’ errors do not deliberate. If the errors had been deliberate, then the actions on the part of the officers would constitute maladministration and the Council would have lost the judicial review. Instead, the judge in using his discretion and giving his opinion that the errors were ‘human’ Park Pharmacy Trust lost the judicial review and was further ordered to pay the costs of Plymouth City Council.

The costs awarded were initially £54,000 but after the Council got bailiffs to ‘seize’ the C J Park pharmacy collection in the Merchants House, the costs rose to £72,000 with interest accruing daily at £11.40 a day. However, the Council only spent £19,000 on the judicial review hearing the rest of the costs awarded are profit of charging £164 an hour for the legal staff at Plymouth Council and for interest.
The trust, being a charity with no money left after having paid its own legal costs in this failed hearing pleaded with the council not to enforce the court order for costs. These pleadings, which came from many supporters led to the Council seizing the main asset of Park Pharmacy Trust and selling this wonderful tourist attraction in the Merchant’s House Museum by auction for which the council obtained £26,500, considerably more than they actually spent on the judicial review hearing (around £18,000) but less than the actual order of costs, which included all their profit costs.

The trust offered to give the C J Park pharmacy to the Council and even agreed to continue to man the pharmacy and provide professional support to satisfy the legal and health requirements of such a collection. Each time the Council refused.

However, the Council, it appeared,  actually wanted the collection, but would not accept it in lieu of the costs. When the collection was seized by bailiffs, it then became the property of the Court. The Council thought they could just keep it. The Council then applied to the High Court to be allowed to purchase the seized collection back for £10,000 by private treaty.

When the judge asked the enforcement officer how much was the debt, the judge was told £54,000. The judge realised that £10,000 would not make a dent in this debt, especially if the trust was awarded the costs of this additional hearing.

The judge then dismissed the Council’s application to purchase the C J Park collection for £10,000 by private treaty and ordered the council to pay its own costs. The enforcement officer was told by the judge that it was his duty to sell seized goods to get the maximum amount of money.

After three Freedom of Information Requests it was discovered that the Council had spent £18,000 on having the collection seized by bailiffs and then going to the High Court to try to buy it back. 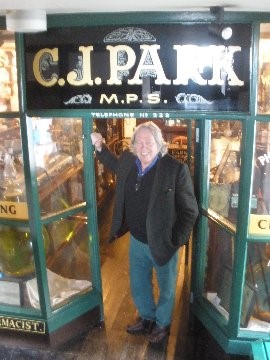 Martin Miller, who bought the entire collection at auction in 2012, is seen outside the shop in the Merchant’s House.  When Martin learned of the circumstances of the auction and the history behind the collection, he put the collection into the Martin Miller Foundation.

The chairman of the Friends of Plymouth Museum and Art Gallery, bid at the auction but was outbid by Martin Miller who bought the collection for £26,500. The council received the £26,500 and was offered the same collection free of charge for The Box. This offer was turned down.

This fairy tale ending will eventually come to fruition with the development of the Plymouth Heritage Health Science Exploratory for the benefit of the whole community and enable Mr Park’s shop to once again be on display in Plymouth.
​
To this end Park Pharmacy Trust is exploring a number of possible sites for this new tourist attraction and is seeking business partners to work with in partnership.